MS70 Gold Buffalo coins are certified as perfect strikes by PCGS and NGC.

2016 coins will be available soon. Please check back for updates, or have a look at bobwhitesilver.com.

PCGS (Professional Coin Grading Service), the most respected name in third-party coin certification, offers a guarantee of grading accuracy and authenticity for each coin they encapsulate. Simply put, A PCGS certified MS70 is known worldwide as the highest grade possible, a perfect coin.

Since 1987, NGC (Numismatic Guaranty Corporation) has been known as a world leader in third party coin certification, offering a guarantee of grading accuracy and authenticity for each coin they encapsulate. This coin is certified a perfect Mint State 70. NGC defines an MS70 Gold Buffalo as having no post-production imperfections at 5x magnification. NGC certified MS70 coins are accepted worldwide as the highest grade possible, a perfect coin.

The American Gold Buffalo is a 1 ounce, .9999 pure, 24-karat gold bullion coin. The Buffalo was first offered for sale by the United States Mint on June 22, 2006, the first and only time the United States Government has minted a pure gold, one oz. coin.

From 1986-2005, the 22-karat, 91.67% pure, American Gold Eagle was the only US one oz. gold bullion coin. Realizing investor demand for 24-karat gold coins, such as the Canadian Gold Maple Leaf, the U.S. government authorized the American Gold Buffalo with the Presidential $1 Coin act of 2005. Upon their release in 2006, these strikingly beautiful coins were instantly a huge success, immediately demanding a place among the world’s elite bullion coins.

The Buffalo’s design is a modified rendition of James Earle Fraser’s acclaimed and iconic ‘Buffalo Nickel’ design of 1913, universally regarded as among the best designs of any U.S. coins. 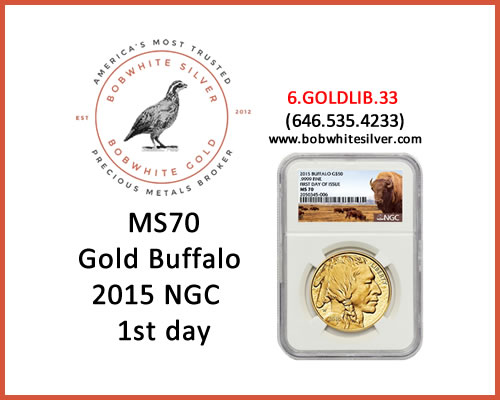 The obverse (front) of the coin depicts a Native American profile. Fraser is quoted as saying that he created the image as a mixture of the features of three chiefs from different American Indian tribes, Big Tree (Seneca Tribe), Iron Tail (Lakota) and Two Moons (Cheyenne), all of whom posed as models for him to sketch. The obverse features the motto “LIBERTY” on the top right, the year of mintage on the bottom left, and below that, the letter F for Fraser.

The reverse features, standing atop a mound of dirt, an American Bison, which are commonly referred to as buffalo. The bison depicted on the reverse is believed to be Black Diamond, who lived in New York City’s Central Park Zoo during the 1910s. The reverse of the American Gold Buffalo also features the words UNITED-STATES-OF-AMERICA along the top and the motto E PLURIBUS UNUM just above the buffalo’s lower back. At the bottom of the design, the words FIVE CENTS from the original Buffalo Nickel have been changed to read $50 1 OZ. .9999 FINE GOLD. The motto, IN GOD WE TRUST, appearing on all U.S. gold coins since 1908, can be seen on the lower left, just beneath the buffalo’s head. 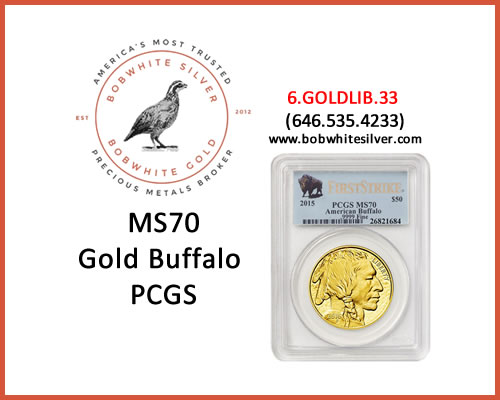 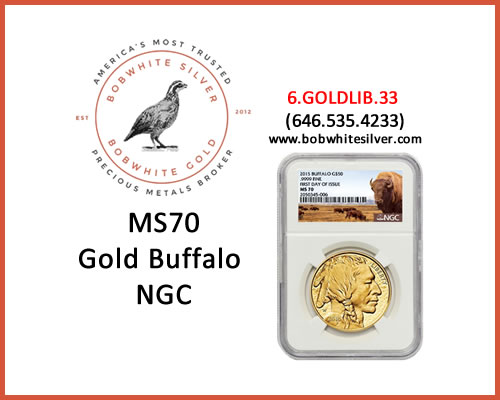 The MS70 Gold Buffalo has been a tremendous investment coin since its introduction in 2006. To see the value of these great coins, please have a look at this NGC registry set

Why buy from us?

At bobwhite silver bobwhite gold (BSBG), I bring over $1.6 billion in business experience to the trading desk. If you require a broker who, in addition to offering great prices and quick delivery on items like these 2015 PCGS & NGC certified perfect MS70 Gold Buffalo coins, provides you with that personal touch, offering patience, transparency and integrity, bobwhite silver is definitely your best choice.

If you have any questions about the 2015 MS70 Gold Buffalo, or you’re ready to make a purchase, please call me at 6.GOLDLIB.33 (646.535.4233) seven days a week! No ever-changing bunch of guys in cubicles, no, “please listen as our menu options have recently changed”, no “dial 9 for a company directory”, just me, Joel (bobwhite is a bird).